/ The final part of Spider Behaviour centers on the development of lightweight architectural enclosure and the systematic design procedure use in three depicted locations. All of which yield different results.

The architecture uses a similar principle in which spiders use to construct their environment with silk webbing through observing their behavioral reactions. 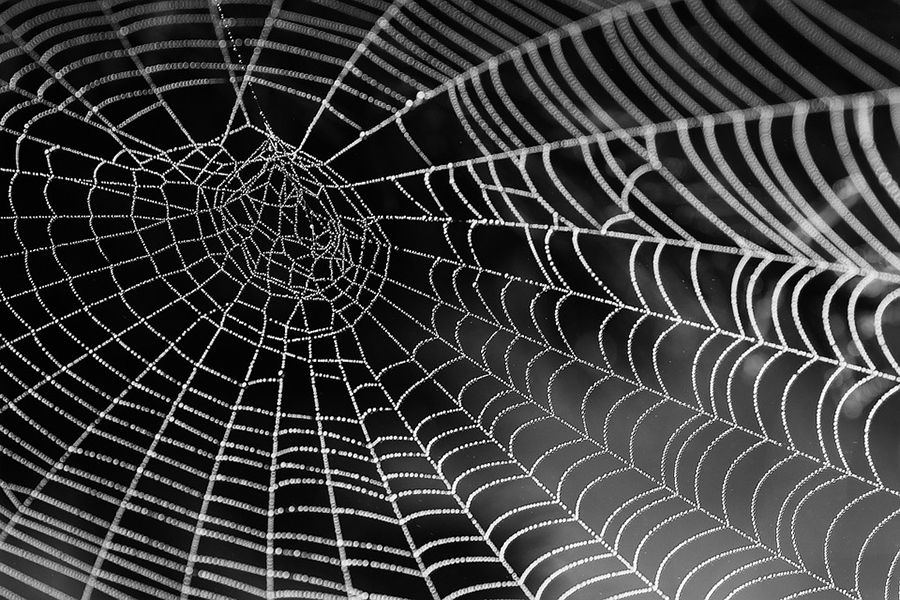 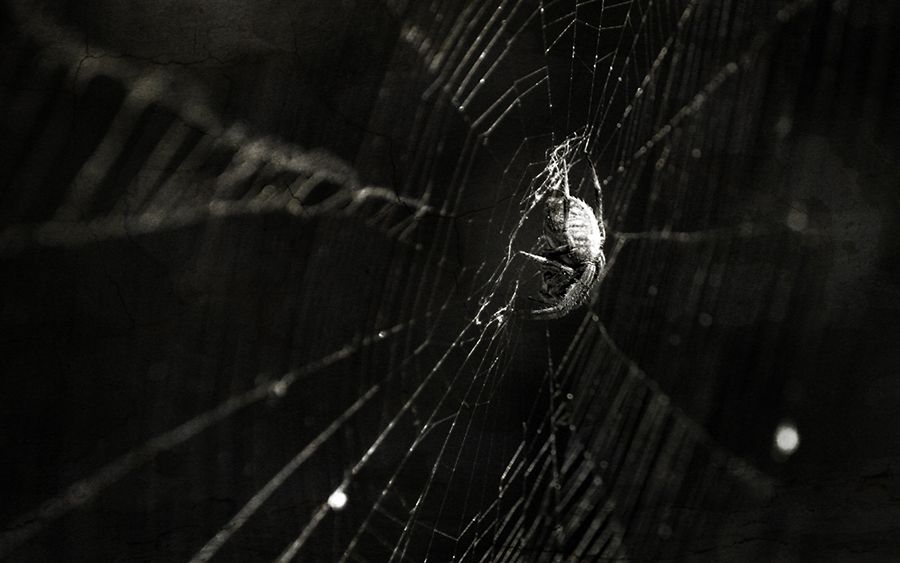 Spiders are arachnids, they are predators that often ventured inside shrubbery, bushes, plants, flowers, cornered or cluttered spaces. Since they are generally unobtrusive and blend into their surroundings, these are attractive places for them to shelter, hunt, and stay cover.

All spiders produce silks, and a single spider produces many different types of silk for different ecological uses. Some use to make cocoons for their eggs, for nest lining, nest construction, guide lines, drop lines, and anchor lines for travel and protection. They also build sticky webs for catching prey.

Infographic illustrating the process of constructing an orb web

Spiral orb webs are the most common type of spider web. The building of it is an engineering feat, begun when the spider floats a line on the wind to another surface from node to node. The spider secures the thread and then drops another thread from the center, making a Y shape. The rest of the scaffolding follows with many auxiliary spirals of nonsticky silk then followed by final spirals of sticky capture silk. /

Trees shrouded in ghostly cocoons line the edges of a submerged farm field, where massive floods drove millions of spiders into the trees to spin their webs.

/ The architectural enclosure was inspired by the structural composition of the Elytra filament pavilion, which was developed by a team from the University of Stuttgart. It comprises of unique hexagonal components that have been robotically fabricated from a combination of transparent glass fiber and black carbon fiber.

Each piece of the structure, which is supported by funnel-shaped legs, is formed by a single length of resin-coated fiber and weighs just 45 kilograms.

Back to the site, the lightweight architecture will be constructed on the face. In other words, the 1000 times enlarged version of the three dissected regions.

/ The landscape of the Eye, Nose, and Ear consisted of many hairs which interpret into a cluster of tall trees with the height ranging from 16 meters to 80 meters. This expansion was based on the initial length of existing hairs.

The shortest eyelash is 1.6 millimeters in length which interpret into a 16 meters tall tree.

The longest sideburn is 8 millimeters in length which interpret into an 80 meters tall tree. 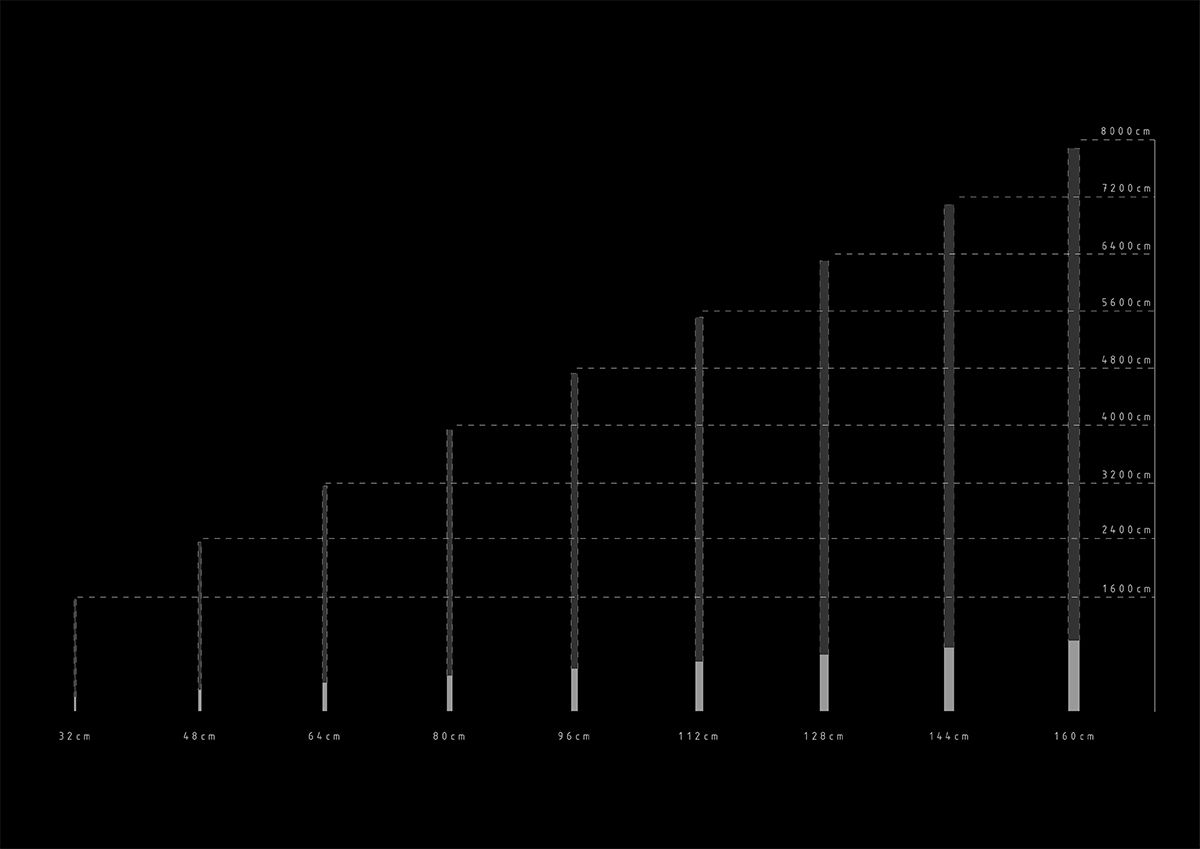 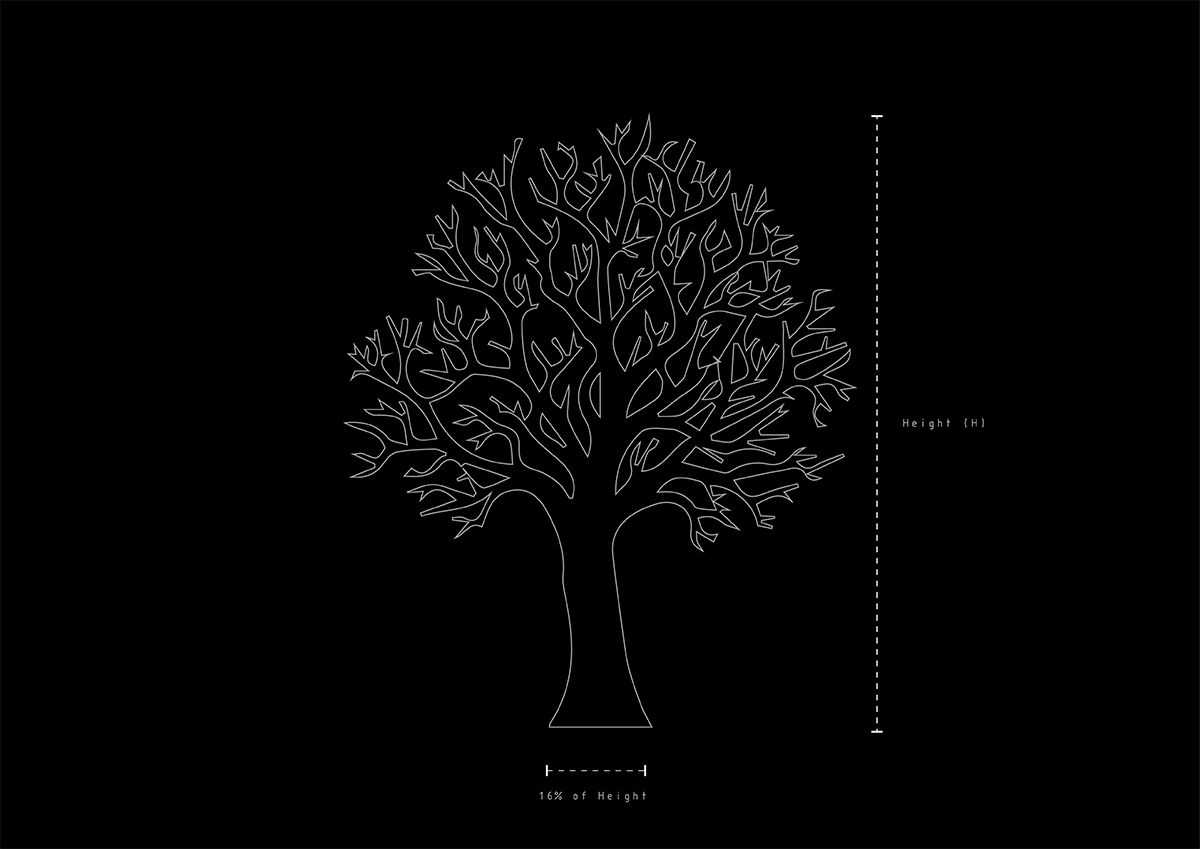 And by using the normalize rule of "width to height" relation, the resulting dimension of the trees on the site can be determined by the graph below.

/ The project also looks into ways to build on and off of living nature. To not only implement architecture into the site but to add on the value of the ecosystem. One technique used to expand the boundary of the buildable area is known as grafting. It is a horticultural technique whereby tissues of plants are joined to continue their growth together.

Arborsculpture is the art and technique of growing and shaping the trunks of trees while they grow. By grafting, bending, and pruning the trees are grown into shapes either ornamental or useful.

/ In this circumstance, the technique helps increasing tree height and buildable space by adding branches that spread out. These nodes are used as a component for architecture to latch, pull, and construct on.

The number of repeats where each tree can branch out depends on the initial width (diameter) of the trunk. Every time a new branch was grafted, its diameter will be half of the prior with the lower limit of 10 centimeters in diameter. 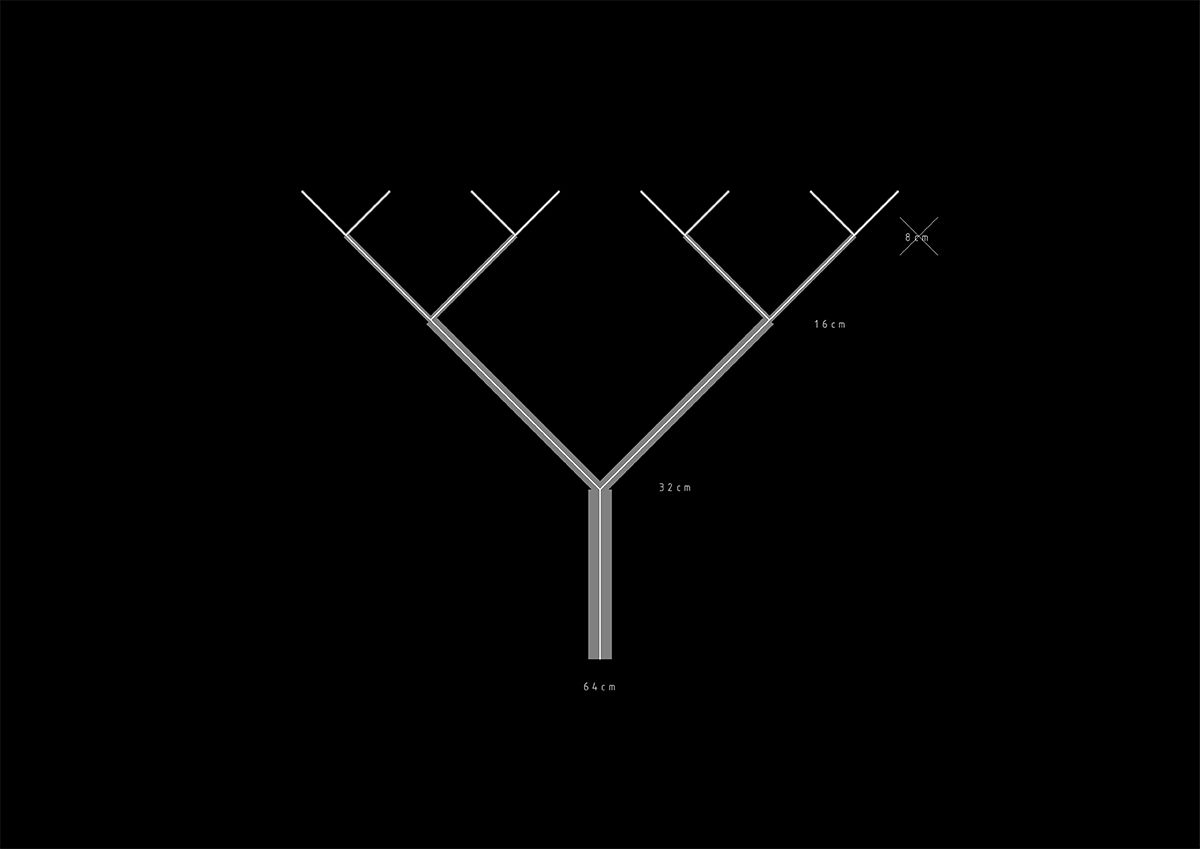 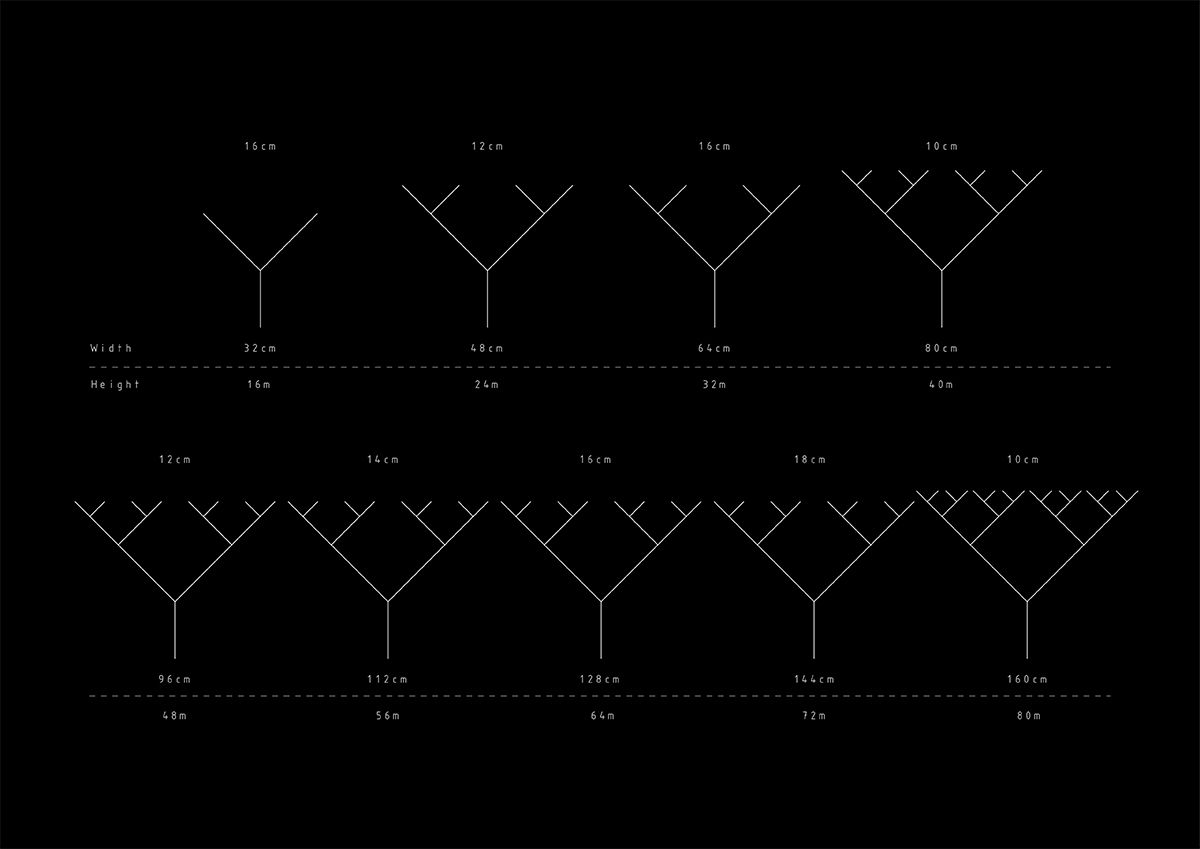 A 16 meters tall tree that has 32 centimeters trunk diameter can branch out once.

On the other hand, an 80 meters tall tree that has 160 centimeters trunk diameter can branch out up to four times.

/ The top view animation below illustrates the steps and composition of floor webbing. Each triangular formation consists of anchor string, which pulls on the joint connected to the grafted branches with sub-string; frame and orb fiber weave use to support stability and for walking. 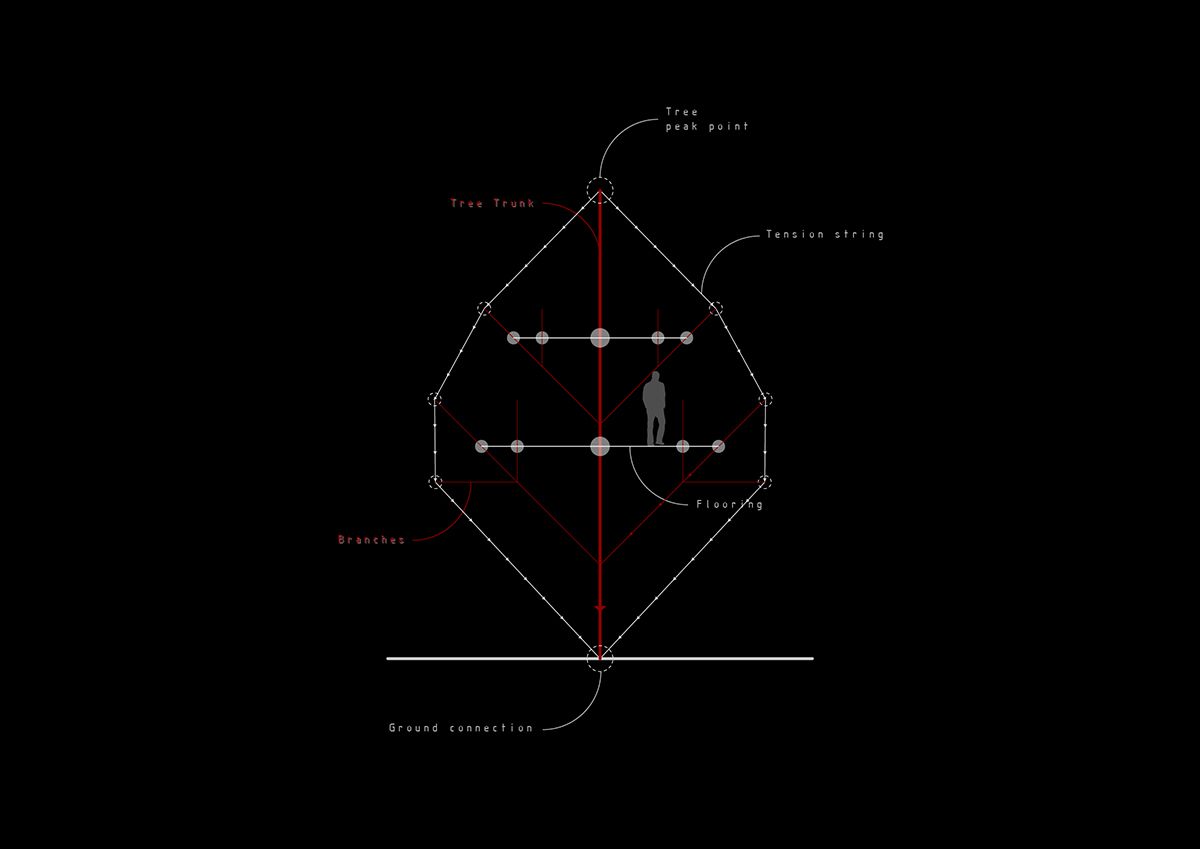 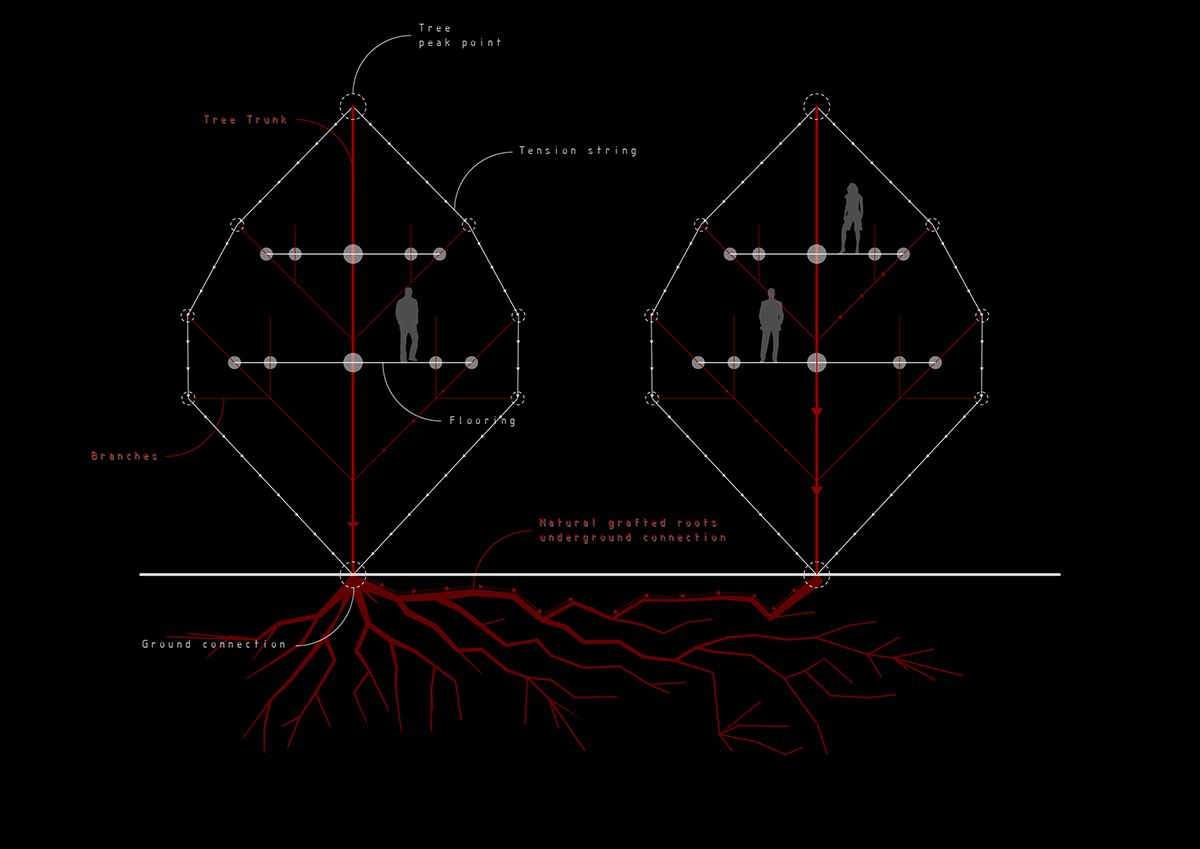 Tree branches and more often roots of the same species will sometimes naturally graft; this is called inosculation. The bark of the tree may be stripped away when the roots make physical contact with each other, exposing the vascular cambium and allowing the roots to graft together.

A group of trees can share water and mineral nutrients via root grafts, which may be advantageous to weaker trees, and may also form a larger root mass as an adaptation to promote fire resistance and regeneration.

Additionally, grafting may protect the group from wind damages as a result of the increased mechanical stability provided by grafting. /

The example unit demonstrates the parametric design system, where it's weave shifting intensity determines from the amount of sunlight radiation exposure on each specific location.

The Suntraps behave like a vertical barricade. Not only did they protect individuals from heat and external threats but also act as a trellis for guiding and support climbing plants such as ivy, which in turn, help trap even more sunlight radiation and allow them to photosynthesis at higher efficiently.

A vine may use rock exposures, other plants, or other supports for growth rather than investing energy in a lot of supportive tissue, enabling the plant to reach sunlight with a minimum investment of energy. This growth form may also enable plants to colonize large areas of architecture quickly, even without climbing high. /

The overall plan drawing of Site I; Eye region.

The architecture was unobtrusive by blending in with the environment. The structure builds upon nature. It lifts itself and doesn't touch the ground. Consequently, this allowed the space to secure its inhabitants from land predators as well as natural flooding.

/ The example cut out a unit of the tree to reveal the external structure, fabrication parts, and details of architectural fusion. 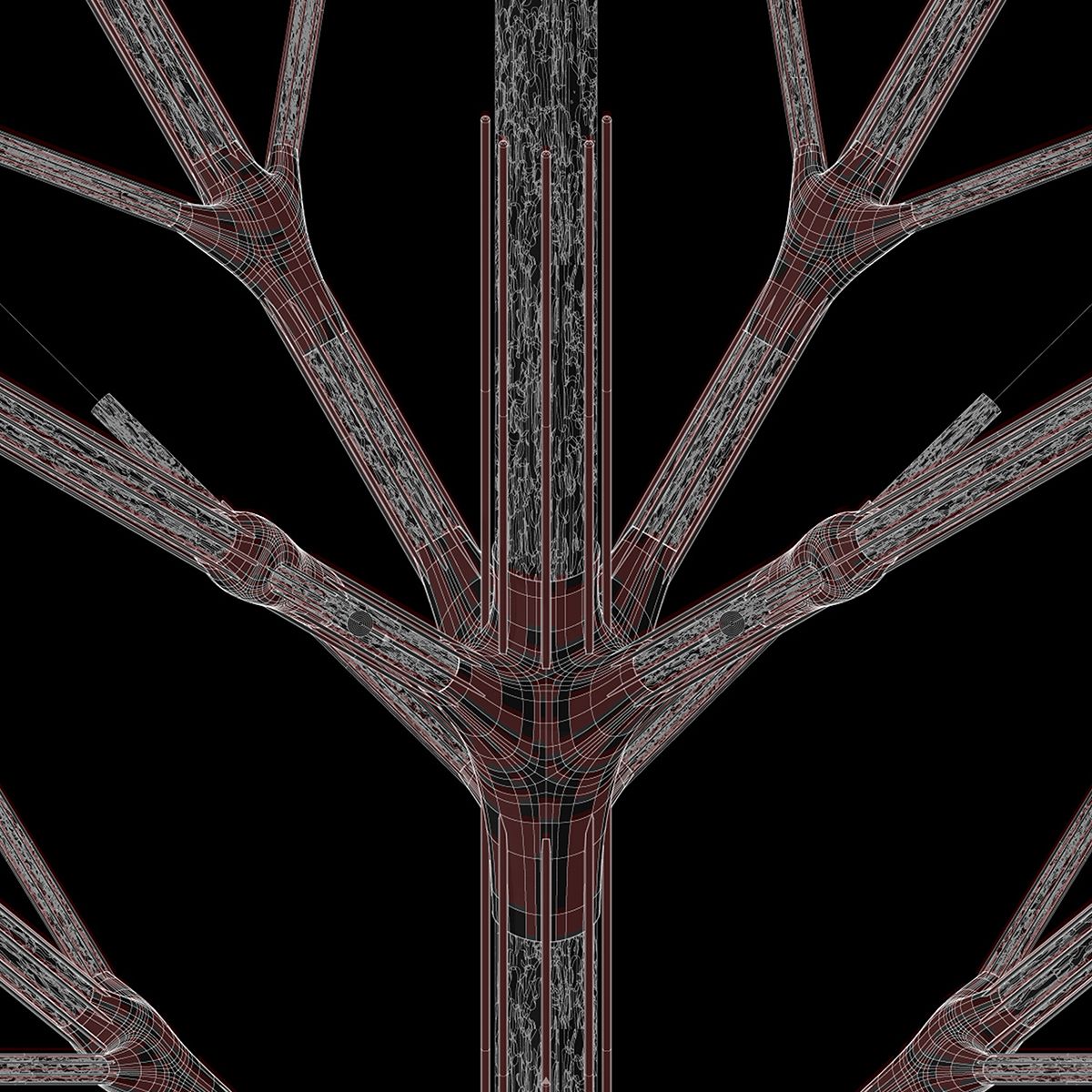 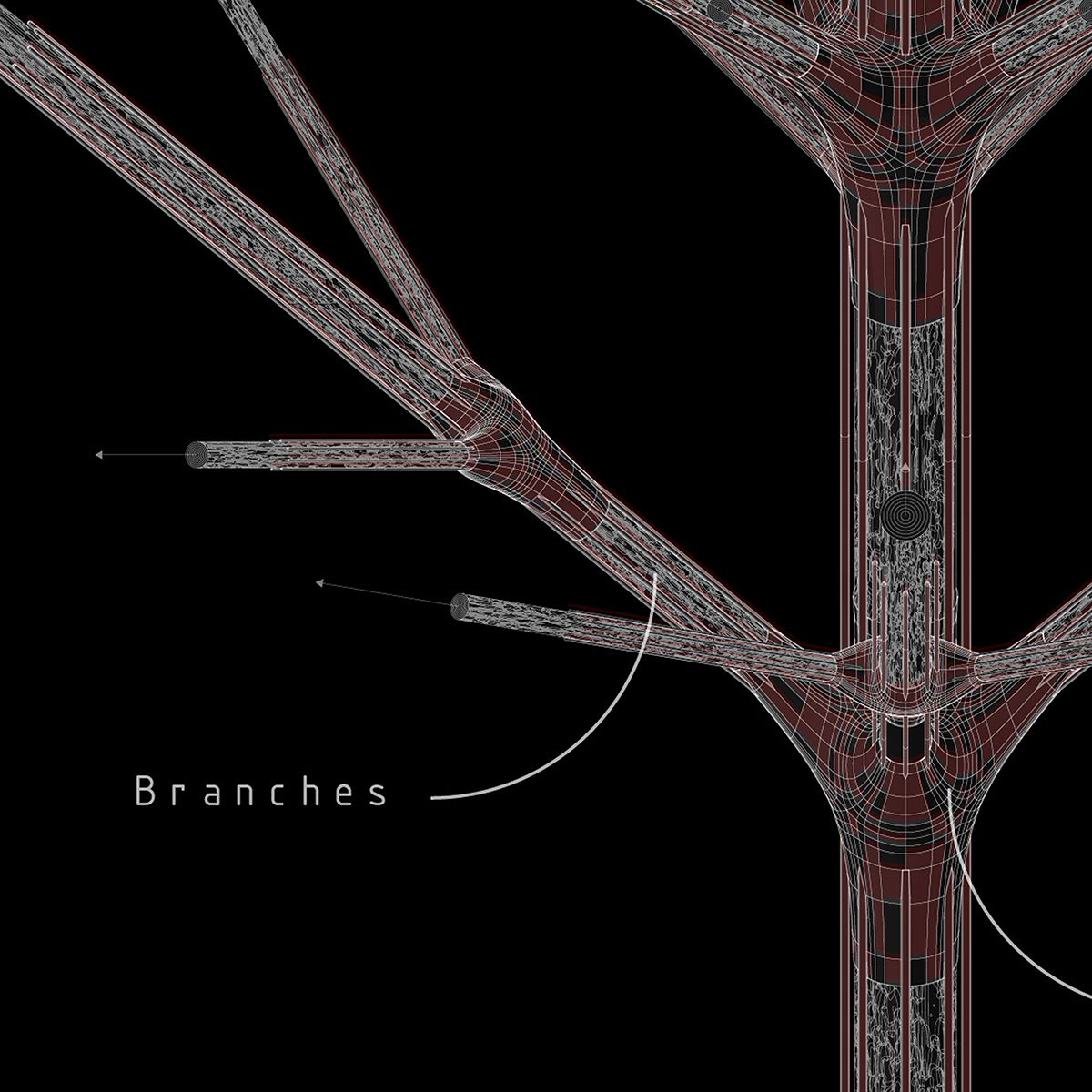 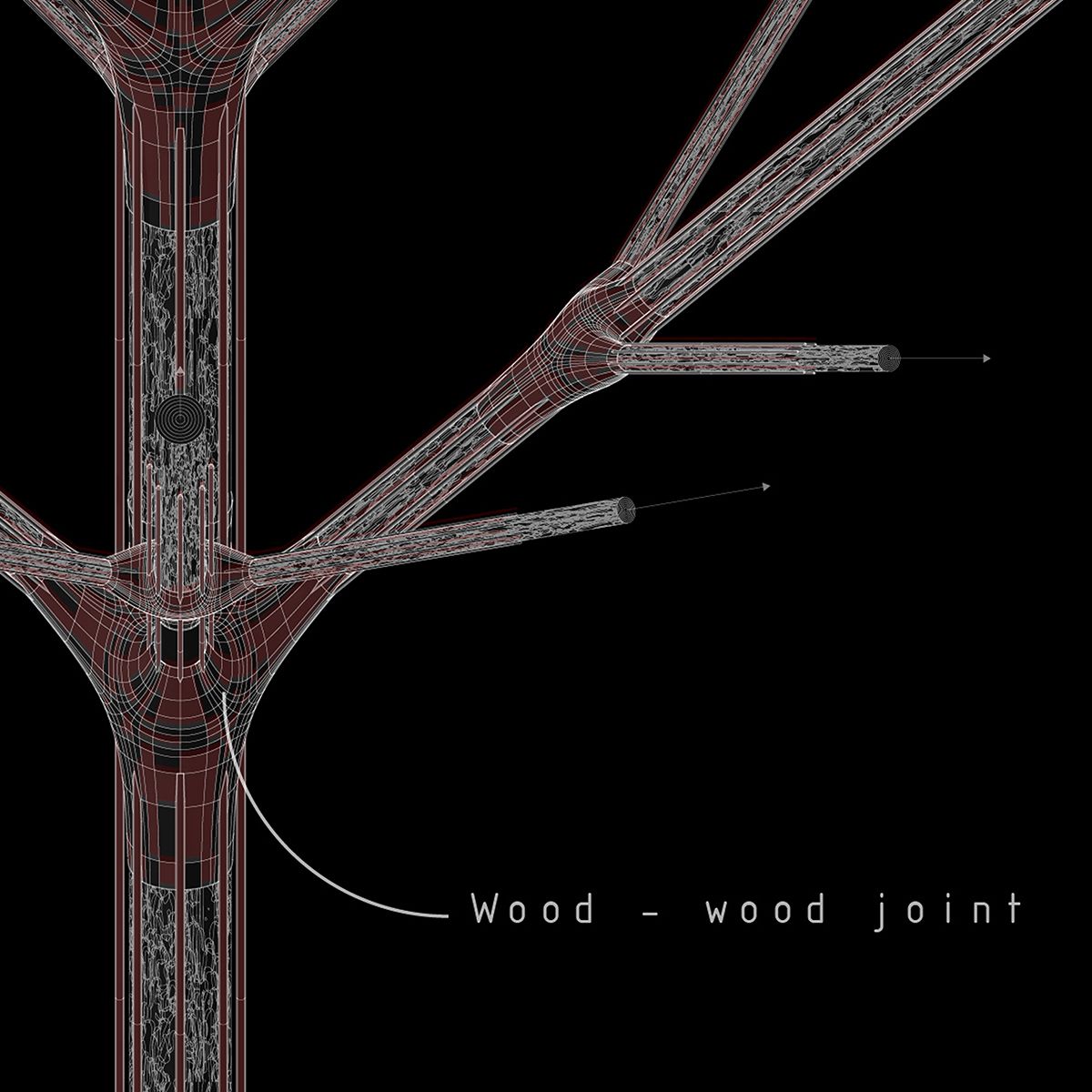 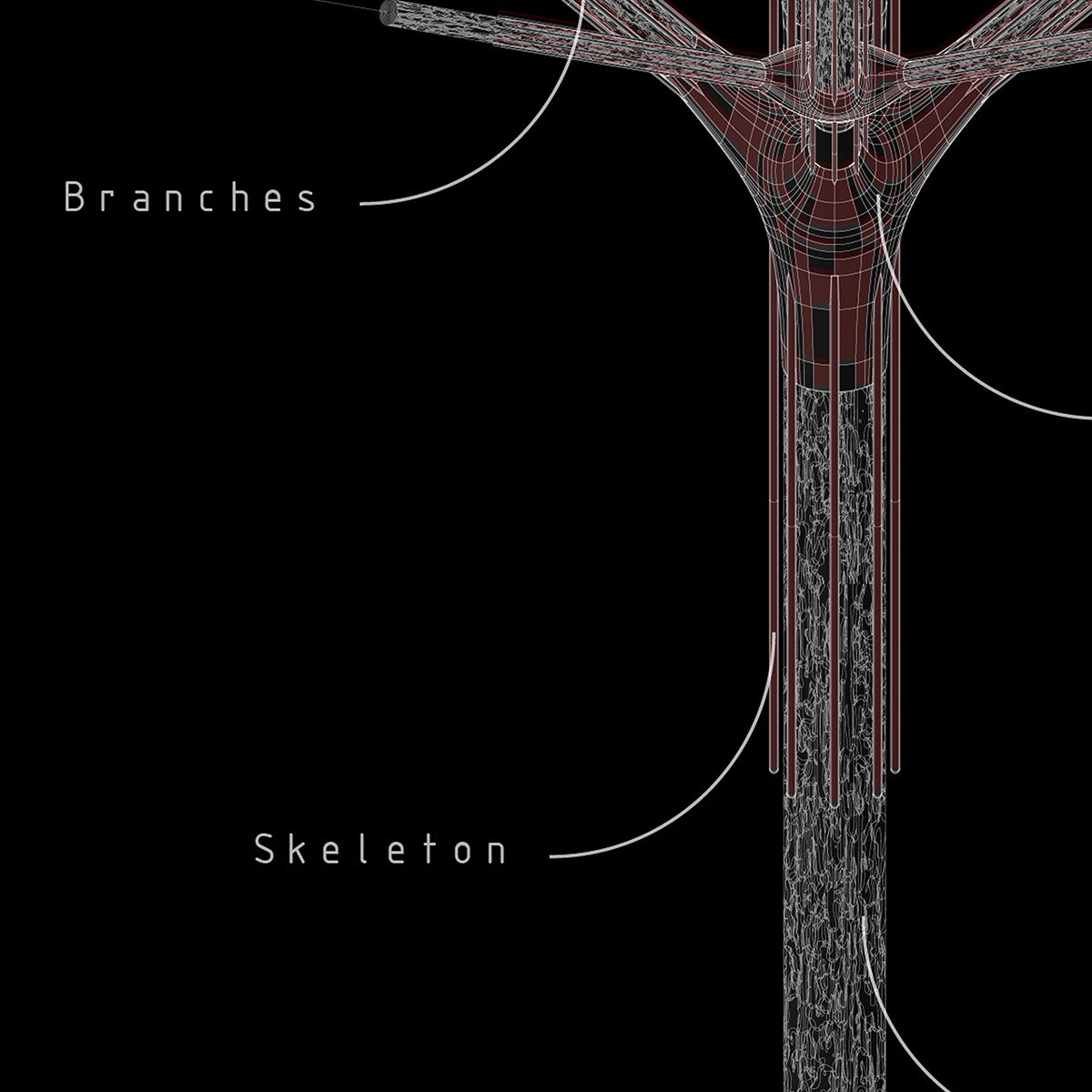 The wood - wood joints help stabilize and fasten the tree at expansion points while the round bars act as skeletons to help protect and support the internal tissue as well as relieving the load.

Exploded portion shows the relationship between the construction and environment. 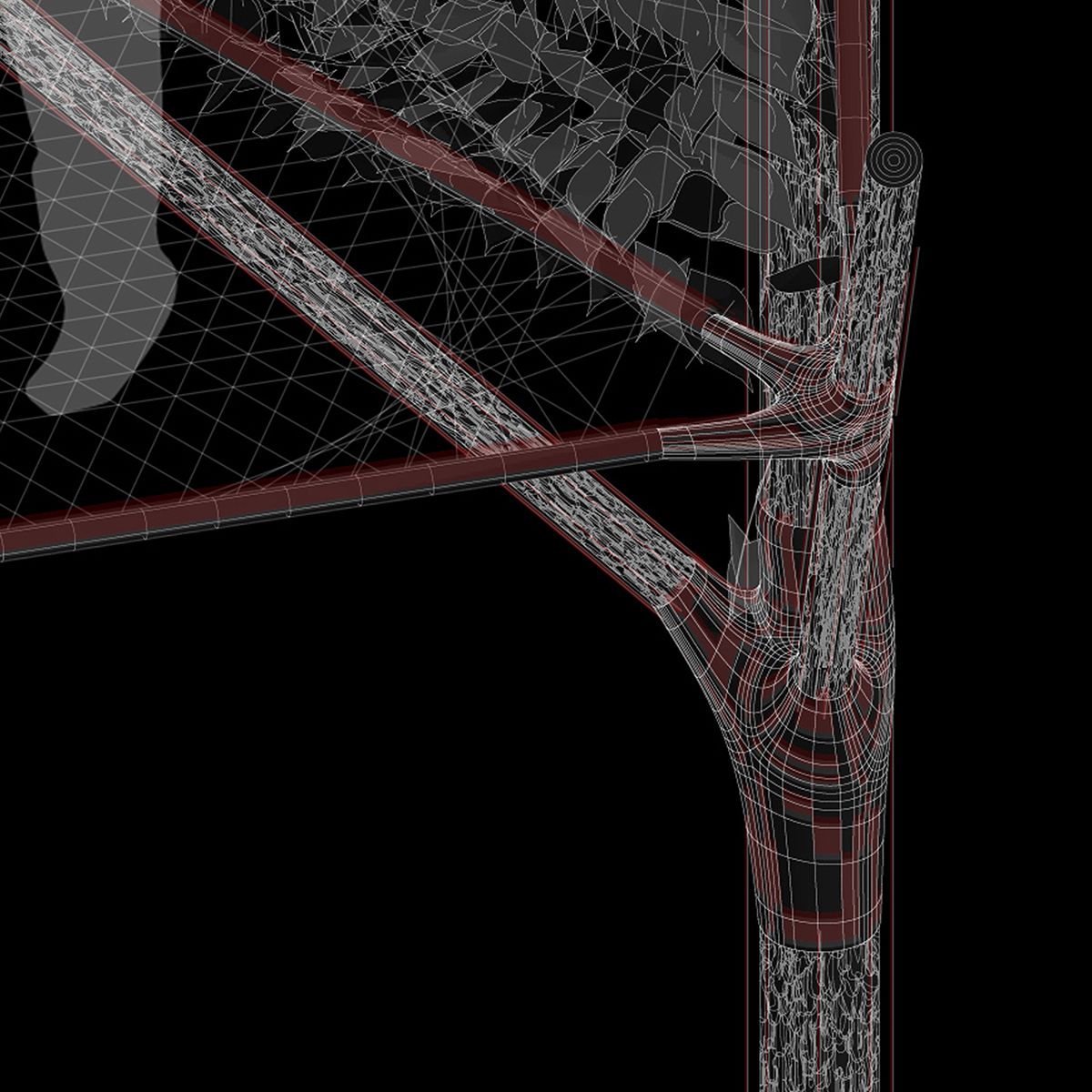 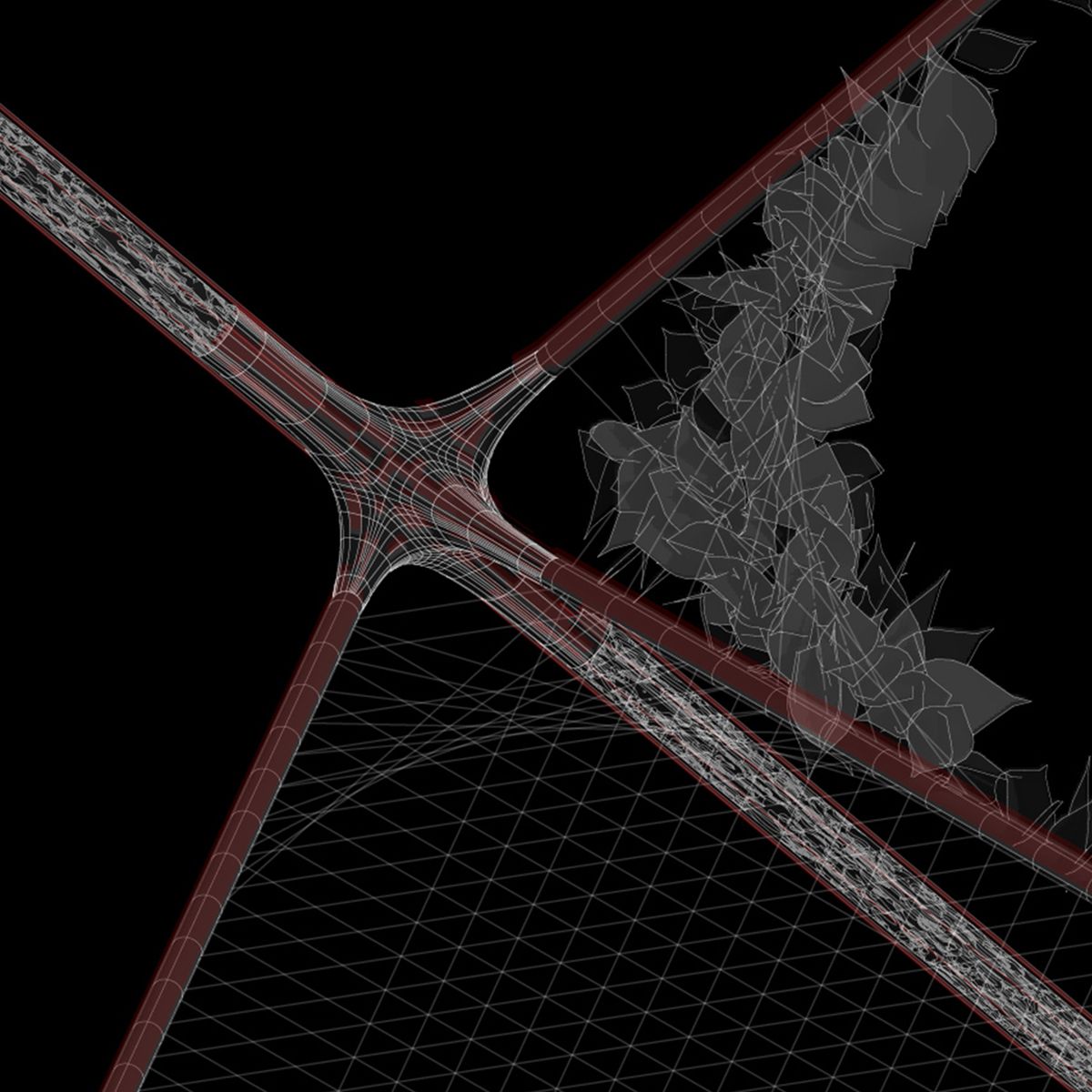 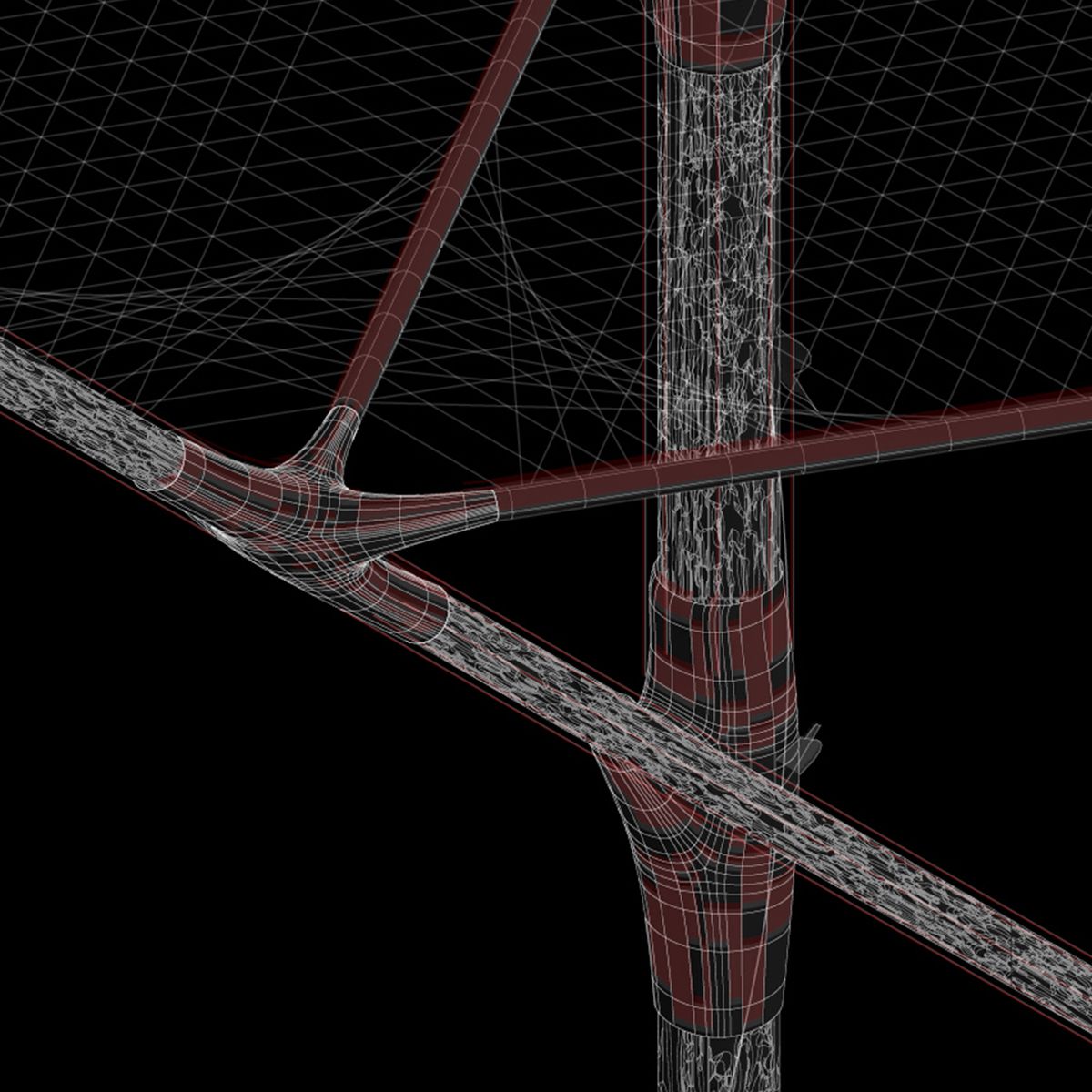 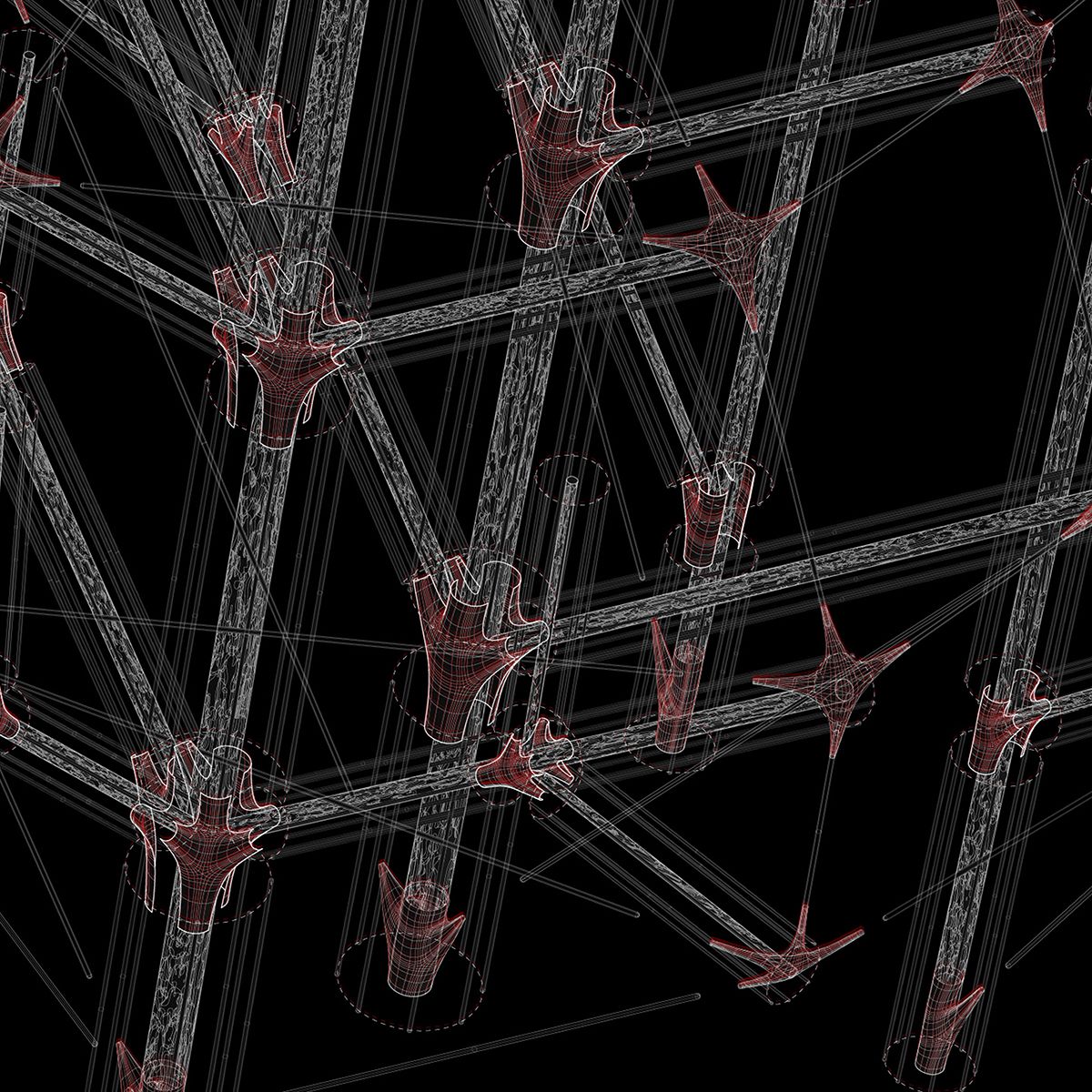 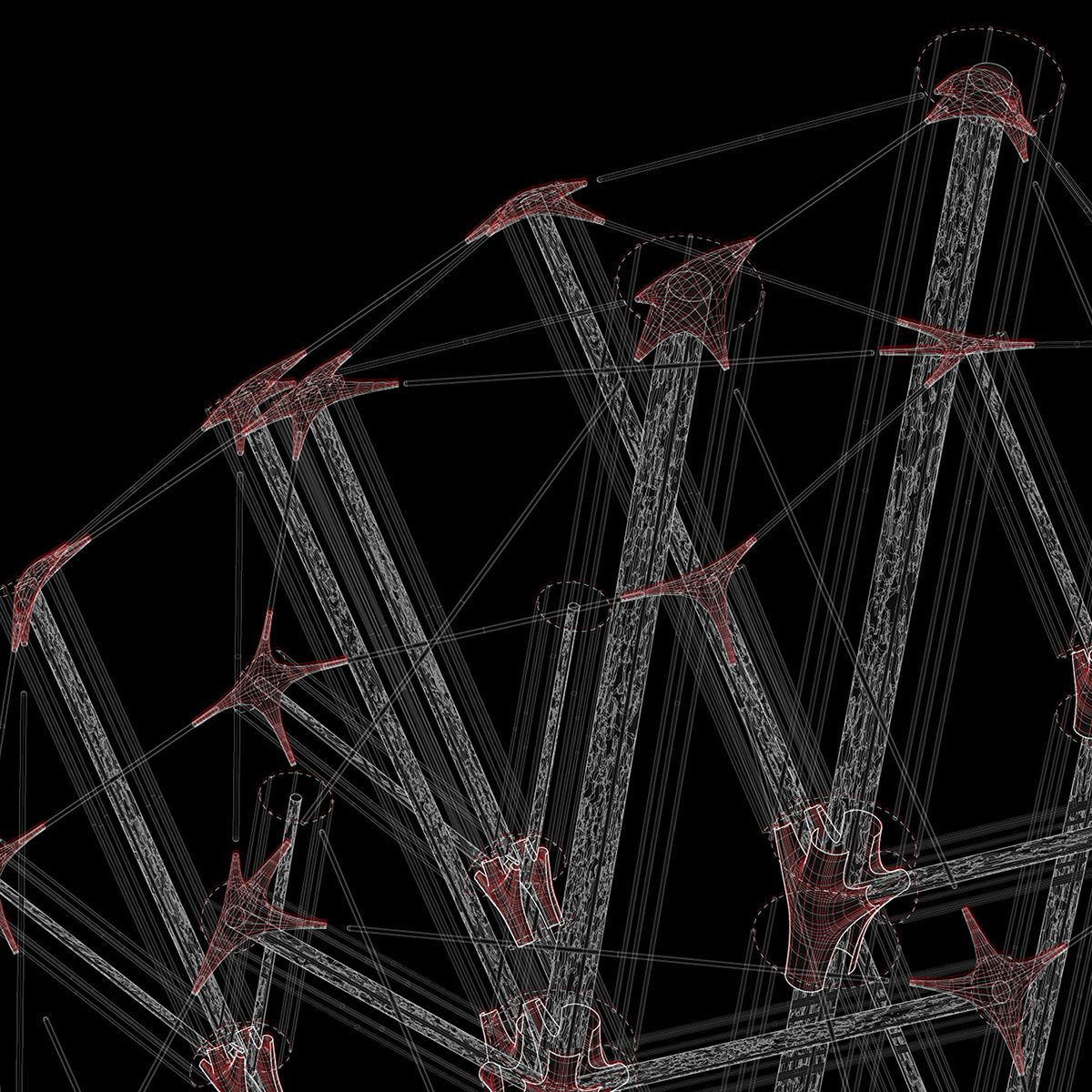 Vertical circulation unit array on top of one another use to access between level. 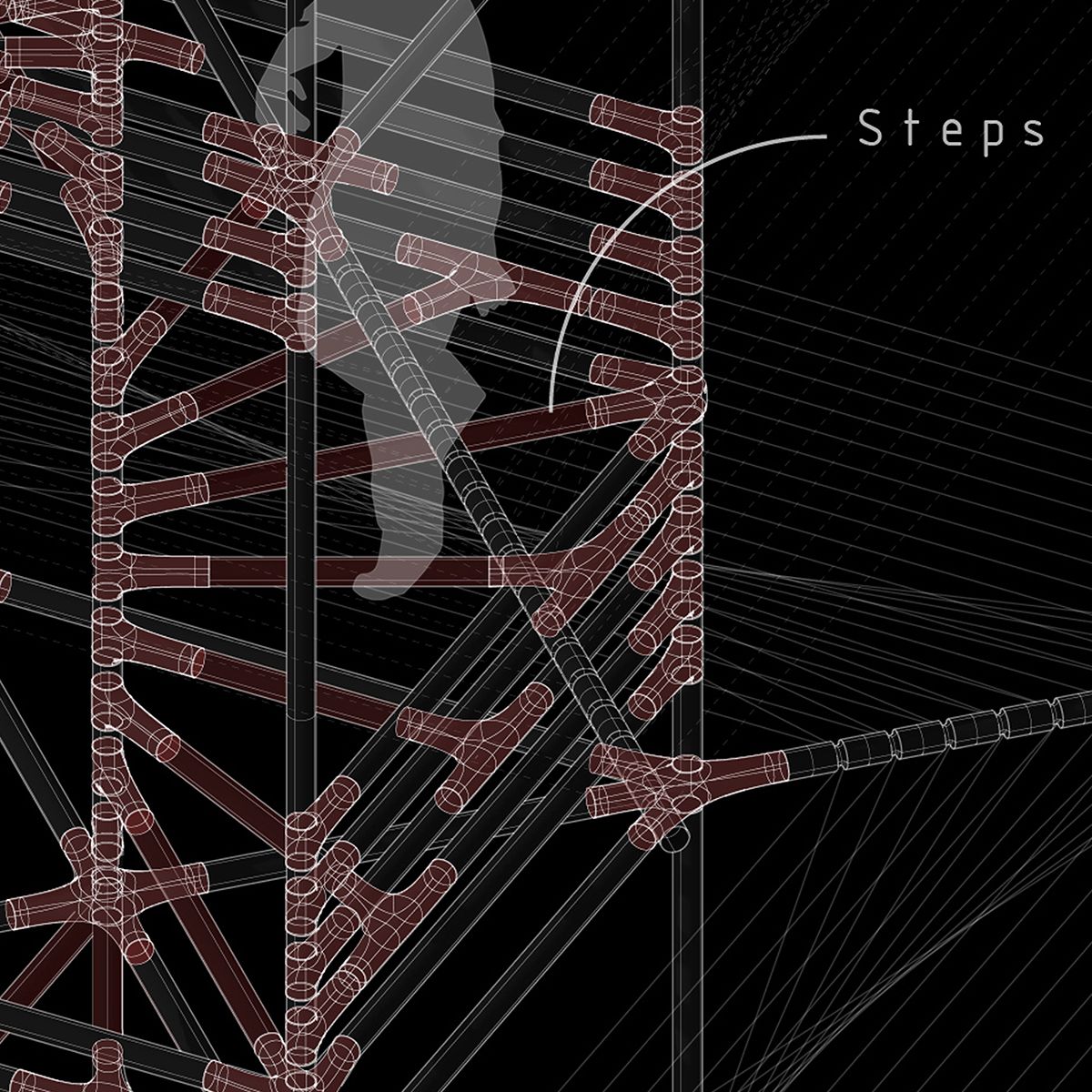 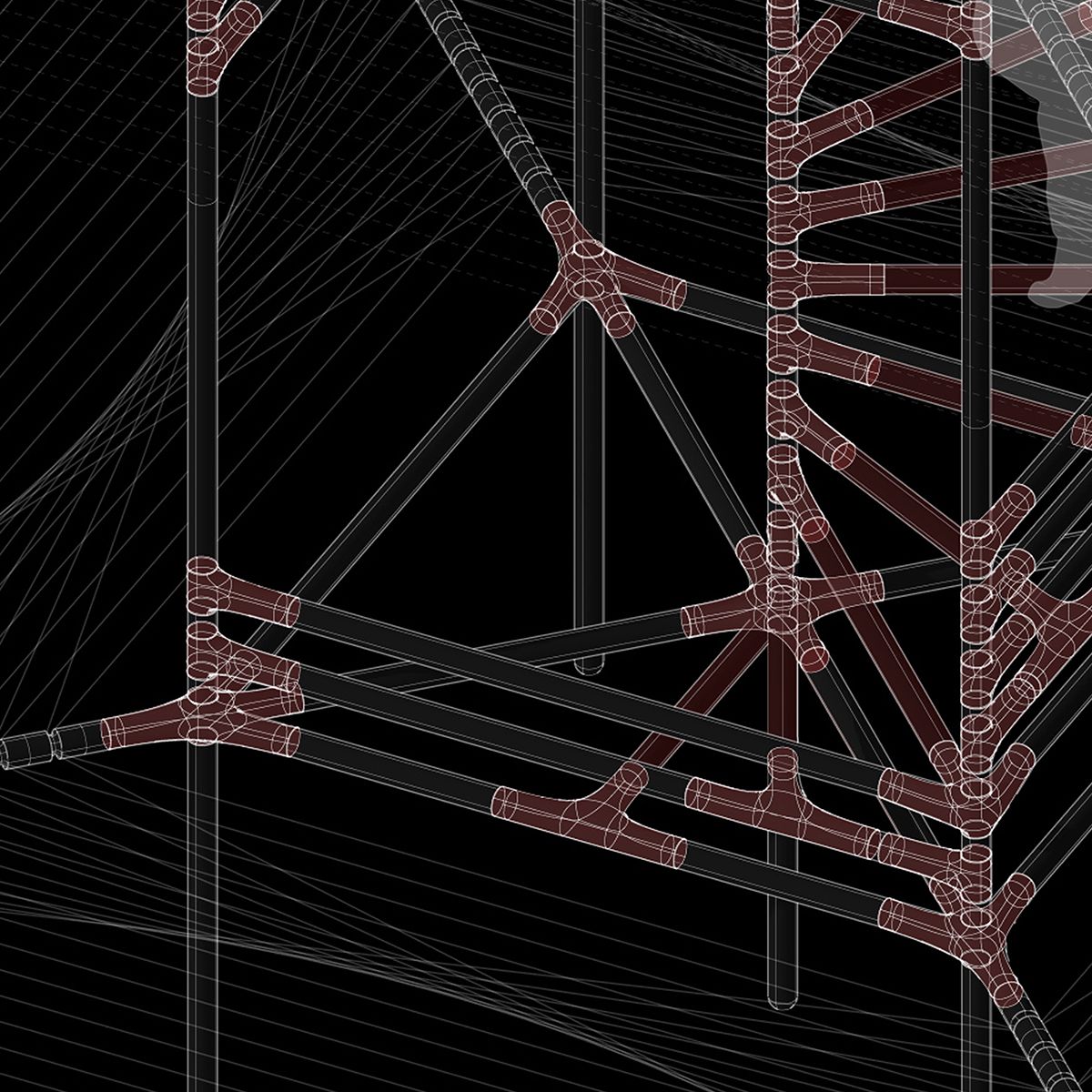 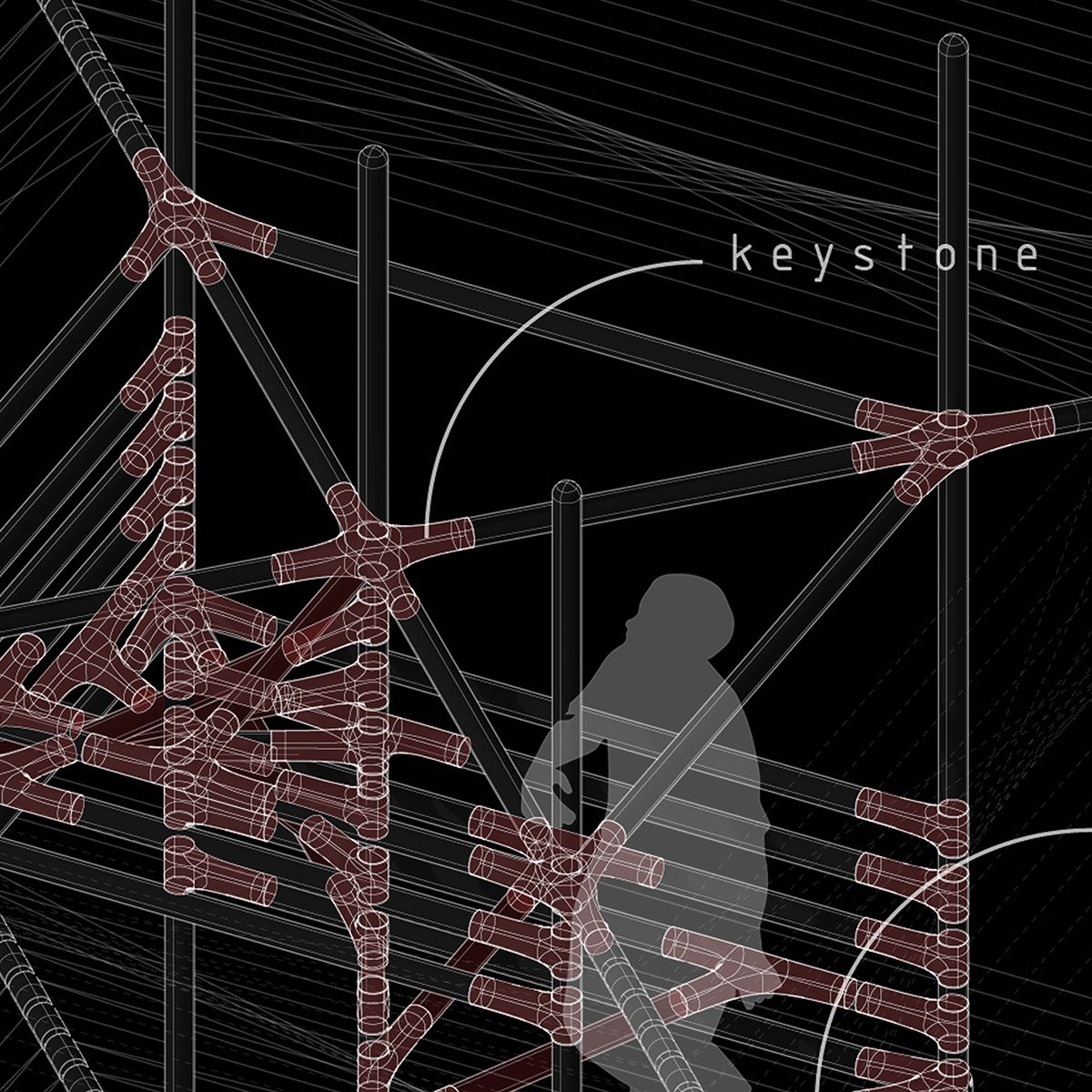 / The parametric design system implement on all three sites; Eye, Nose, and Ear, each with corresponding results that best fit the environmental constraints.

The Nose & Mouth region has a wide range of extreme landscapes. The slopes gradually change from top to bottom with patches of trees situated in between each hill interval. The soil in the lower area contains an unusual slippery and muddy condition. Strung across it are platforms that span from hill to hill to connect the architecture. /

The last region behaves like a plateau or a plain. The landscape is very subtle and reveals no striking features besides the significant taller trees that grew in an adjacent direction. Consequently, the architecture recognizes the features and builds upon them, which resulting in constructions that become one giant collective dwelling. / 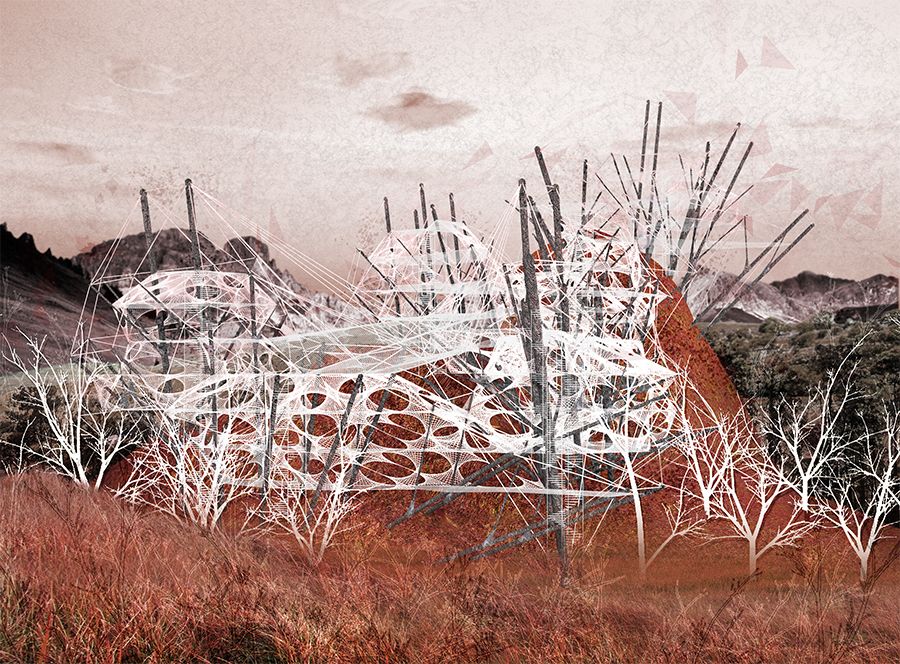 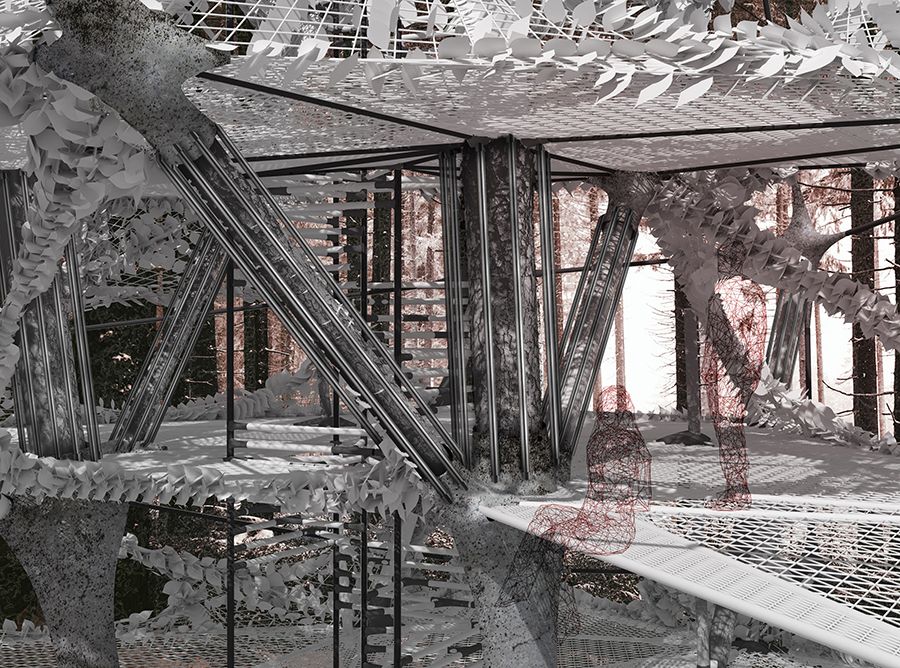 The objective of Spider Behaviour is achieved by fusing architecture into their mutually living environment. By studying and respecting the behaviour of natural execution and implement them into working. To challenge innovation in design and construction like augmenting the face, integrate computer-aided design technique, and using parametric design procedure in manufacturing production. All of which aim to push boundaries in solving design solutions in an aesthetic, conservative, and functional approach. Conclusively, to search for fresh, organic, and smart new design systems that push boundaries and mark a leap in Architecture today. /